"According to St. Catherine’s senior Superintendent Kelly, during the program violent incidents decreased from an average of 15-per week to less than 1-per month, and there was a period of 3-consecutive months where there wasn’t a single violent incident.” – The End Violence Project Pilot Report, Jamaica 2015 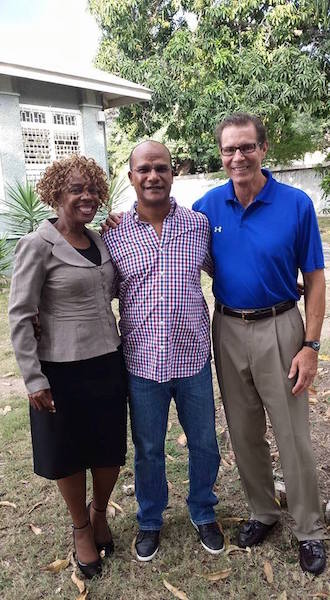 It all started in Atlanta. Several years back Joe Rink, executive director of the End Violence Project (EVP) and the person responsible for overall program delivery and expansion, trained a group to lead EVP programs in Atlanta prisons. In that group was Coral Crew-Noble, a Jamaican woman born and raised in England. She went on to become an Introduction Leader Program (ILP) classroom leader with Landmark Education. She was leading a classroom in Jamaica when she reconnected with Joe Rink with the intention of bringing EVP programs to the island nation in the Caribbean.

Crew-Noble knew the Jamaican Minister of National Security who was, at that time, Peter Bunting, also a graduate of Landmark Education and the ILP. She had talked with him about EVP and the program sparked interest. In January 2014 Rink went down to Jamaica to lead an introduction to the Landmark Forum for their ILP classroom, and also to meet Peter Bunting for the first time.

“I didn’t think anything would come of it,” Rink recalls. He gave Bunting a basic information packet about EVP programs, they chatted a bit and he thought that was the end of it. “I didn’t even think it was possible based on the way their prison system was structured.” To his surprise, a year later he heard from Crew-Noble that Bunting was interested in implementing the program in a Jamaica prison.

In January of 2015 Janet Novack, a Philadelphia attorney and also an EVP board member who has been leading programs in Graterford Prison since 2006, joined Rink in leading an orientation in the St. Catherine Adult Correctional Centre (SCACC), an all-male institution located in Spanish Town, St. Catherine, Jamaica. Built in 1863, SCACC has never been renovated. “It’s pretty deplorable,” says Rink. “They have a gallows there with three nooses. They haven’t used it since the 80s, but still, it’s there.”

Rink and Novack led to a group of leaders and 45 inmates. Rink remembers standing in the outdoor chapel where the orientation was being held. He took the microphone and walked around the aisles, looking the men in their eyes.

“I got present to, these guys are human beings,” he says. “They’re human beings that have heart and want to make a difference. I just knew it. I said to them, ‘You know, when you came out of the chute the doctor didn’t hold you up and say, ‘Oh, this is a bad one.’ It didn’t happen that way.’ I saw that they operate in a world using tools that were available to them in the environment in which they grew up.”

43 inmates registered to do the program. Then the guards spoke up and asked, How about us? A parallel program was started with the staff two weeks prior to starting with the inmates.

They had gotten this far but Rink still had some doubts. In a culture where there is a weak relationship to commitment, to following through and being one’s word, how would the program prevail if there weren’t enough leaders to lead? Of half dozen or so leaders initially trained, only two, plus Crew-Noble, actually led the program.

But it helped that Bunting, along with his executives and administrators, were so enrolled. “Everyone was cooperative and hungry for this program,” says Rink. “The prisons there make our prisons look like country clubs so they were eager to have something that could make a difference.”

Things are tough in Jamaica all around, let alone within prisons. Rink explains that the economy is so depressed, for a lot of people their only way of life is stealing and violence. “It’s pretty pervasive,” he says, “not a lot of possibility for the average person in that country.”

In fact, when asked if apologizing is a good way to avoid conflicts, 33% of the 24 respondents (8 persons) were in strong agreement with this statement in the pre-test compared to 63% (15 persons) in the post-test. As the program got started, the leaders had to take into consideration that some of the guys couldn’t read and note taking wasn’t an option. Nonetheless, Rink knew things were taking root a few weeks into the program as Crew-Noble reported how the staff was taking it into their own lives and making a difference in their families.

As for the inmates? The results were remarkable. Read all about it in two comprehensive reports:

The End Violence Programme Assessment Report (PDF) published in October 2015 by the Ministry of National Security Research and Evaluation Unit
​
We say special thanks to our team in Jamaica for these thorough reports, the best collections of hard data to date, to demonstrate the effectiveness of End Violence Project programs.

In 2015 the End Violence Project selected William Abbott of Auburn, Washington, as the first ever Mahin Bina Memorial Scholarship winner, an annual award program that recognizes returning citizens (men or women formerly incarcerated in a U.S. state or federal correctional institution) who are furthering their education and demonstrating leadership in their communities. Abbott learned about the scholarship through Seattle Central where he’s earning his associate’s degree. 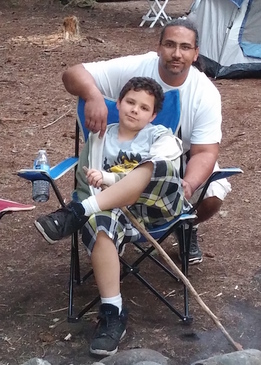 “I used to lie in my cell and make up scenarios in my head about coming home from work, my son greeting me, having a nice home and a nice car and feeling good about the life I was living,” says William Abbott, a single dad who spent 13 years in the Arizona state prison system, “but I never believed it would actually happen.”
10 years ago, he never thought he’d have more than a GED. Now Abbott is four credits away from an associate’s degree in Social and Human Services at Seattle Central and has already been accepted to several schools for bachelor’s programs. His top pick is University of Washington, the third highest ranked school in the nation for social work.
Abbott has a passion for helping addicts as well as the homeless and disadvantaged, and people who are coming out of prison.
“Like the president says, we don’t shoot our wounded,” he states. “We go out there and get them and bring them back where they belong.” He is planning to go on to complete the master’s program and get a doctorate.
Abbott is currently a full-time student and a full-time single dad to an 11-year-old son who is high-functioning autistic. He also has a 17-year-old daughter in California who comes to visit regularly. For the sake of his dream of higher education and contribution to the underprivileged, Abbott seeks out scholarships and student loans to help pay the rent and the car payment, and make sure his son has a nutritious lunch every day.

The fork in the road
“When you get out of prison, there’s a fork in the road,” Abbott reflects. “There’s the side that’s doing the right stuff, or the side that’s not. It’s a really narrow fork and it’s easy to go in the direction that’s not good.”
When Abbott first got out of prison, all he had was the clothes on his back and a $50 check, which he couldn’t cash because he had no ID. At that point, he says, he took the wrong road. He got into heroin and was an addict for almost 20 years. “Everyone had given up on me,” Abbott says. “The detoxes wouldn’t even accept me.”
Until he met a man named John who showed him faith in himself that he didn’t have. “He taught me I could do something different with my life. No matter what other people told me, I could do anything I wanted.”

Education as a foundation for freedom
Once he had about two years clean, Abbott made a decision that he wanted to help people. He started going to school and was introduced to the Post-Prison Education Program (PPEP) where he did 330 hours of field placement and then got hired on.
“I really believe it was more of a divine calling to that place,” Abbott reflects. “I made a decision I would get as much education as I can and champion the cause against recidivism. The PPEP uses education to keep people out (of prison). We start people thinking and dreaming about their future while they’re still in prison. We help people put the past in the past. To be the person, citizen, husband/wife, most importantly, the parent they want to be.”
“My life today is better than any dream I ever had,” Abbott adds. “There’s nothing that I’m not going to reach for anymore.”
​
More information about the Mahin Bina Memorial Scholarship for ex-offenders
The End Violence Project is now accepting applications for the 2016 Mahin Bina Memorial Scholarship program.

n each newsletter we will introduce you to an End Violence Project volunteer, including leaders and facilitators in and outside of prisons, as well as board members and others associated with our work. This month, meet Coral Crew-Noble. 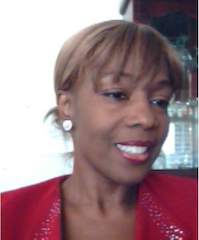 Where did you grow up?
I was born and grew up in London, England. As an adult, I have lived throughout the United States (Houston, TX, Los Angeles, CA, Atlanta, GA) before I made the “temporary” move to Jamaica to take care of my mom in 2011. And then I decided to stay!
​
How do you spend time when you’re not volunteering for EVP?
I coordinate Unite for Change a national initiative for the Ministry of National Security in Jamaica aimed at empowering citizens, governmental ministries, departments and agencies, small businesses, faith-based organizations, community based organizations and NGOs to work together in reducing the high rates of crime and violence. In my free time, I love to spend time on the beach, get away for a weekend in the U.S. with friends or to visit family in Canada or the U.K.

How did you become involved in the EVP?
In 2008, while living in Atlanta, Wendy Lippard (EVP Board Member) and I were Introduction Leaders together. Wendy shared about the EVP and I was so inspired by Wendy’s courage and power that I attended an EVP training in South Carolina (led by Joe Rink). I was unable to commit to leading at that time due to my mom’s health.
In 2013, I was leading the Introduction Leaders Program in Jamaica and Joe Rink came back into my life as my coach. I thought, “What is the universe trying to tell me?” I knew the Minister of National Security in Jamaica (Peter Bunting) was a Landmark graduate and knew how distraught he was about the rate of crime and violence in Jamaica. I connected Joe Rink and Peter Bunting and the rest became history!

Can you recall a favorite moment from one of the programs?
I recalled when one 26 year-old 6’2” guy got the difference between restorative and retributive justice. He had missed multiple EVP sessions because he kept going into “lock-up” for fighting. In the completion session he shared that he forgave the person who stabbed him, and, as a result, he chose not to stab him back. He got that he could choose his actions, and didn’t have to be goaded into responding violently. Another man delayed his parole until after the end of the EVP program so he could complete it.

What future are you creating?
When Peter Bunting (the now former Minister of National Security) attended the last EVP training in January 2015, he predicted if the EVP was in the prisons for two years violent crimes in Jamaica would be reduced by half. So the plan on the table with the department of corrections is to expand the EVP into the two largest (maximum security) prisons in Jamaica. Combined, they house more than 50% of the total incarcerated population.

​THIS WEBSITE GENEROUSLY FUNDED BY INTELLIDRIVES
© COPYRIGHT 2016-2020. ALL RIGHTS RESERVED.